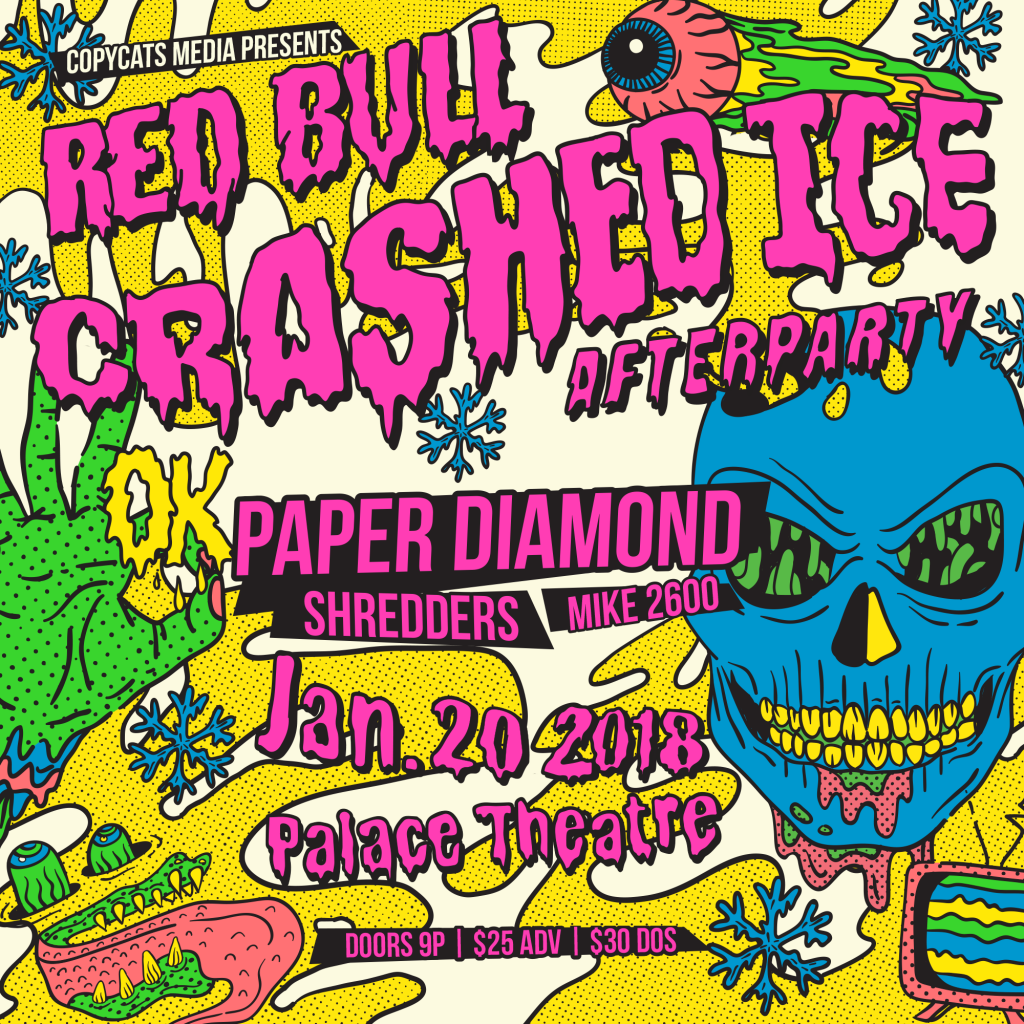 In November, we hosted a Shredders pop up show that was held at Bauhaus. We got to the design work for the promotional poster and their social media posts. Because of that success, the local Red Bull promotions team reached out to us to not only sponsor, but to design the poster and social media art for their Red Bull Crashed Ice Afterparty on January 20th, 2018. Happily, we obliged at the opportunity!

We wanted to come up with a pretty detailed theme or design style to make it unique and stand out not only to make something super cool for Red Bull, but also to generate interest to make people excited about the event. We approached the Red Bull team with the idea of making the art a modern take on the mid to late 90s skateboard culture. Think Santa Cruz Skateboards, Jason Lee (yes, that Jason Lee, but before he became an actor), with a little bit of Rat Fink thrown in for good measure.

Lucky for us Red Bull is based in the Santa Monica area so this totally aligned with their brand and culture. We got the go ahead from all the important marketing people, and thus we set to work. The first deliverable due was the poster, so that was where we started.

After drawing the funky little characters and custom type, vectorizing each of those elements, colorizing, and laying everything out, this is what the final product looked like! 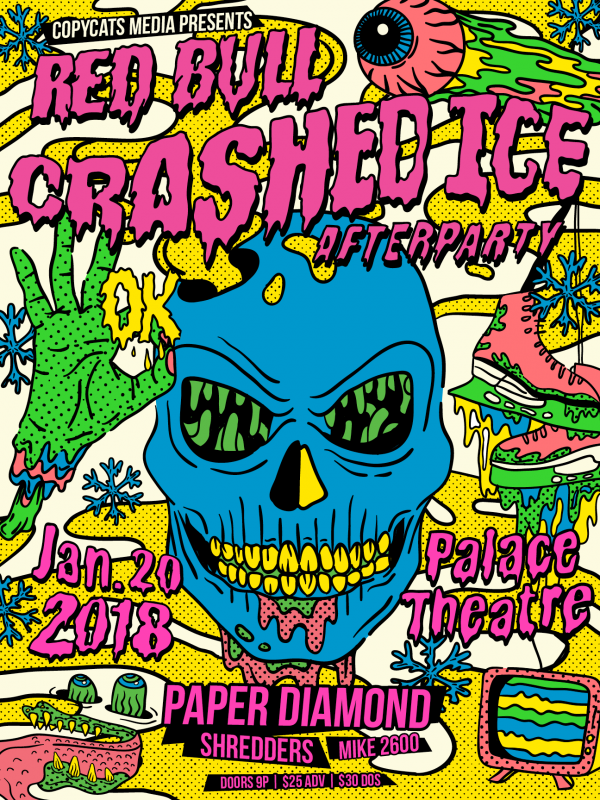 Luckily for us, there was only a few minor edits that were needed to be made, so it was pretty much ready to go. The next needed element was all the social media deliverables. We had to take the poster artwork and convert it to a square images for Facebook and Instagram, as well as create an event banner for the Facebook event. Everything is sized to a different ratio, which means it takes a bit of work to rearrange everything and still look like the ‘original’ piece of work, in this case still keeping all the elements but making it look just like the poster.

We also knew that because of the success of the Shredders event, we wanted to make a gif. It’s been really cool that you can utilize the gif on social media channels now, and we want to take advantage of that with artwork like this that really feels like it has movement on it’s own.

We think it turned out really awesome! Don’t you?

And here’s the corresponding event banner. 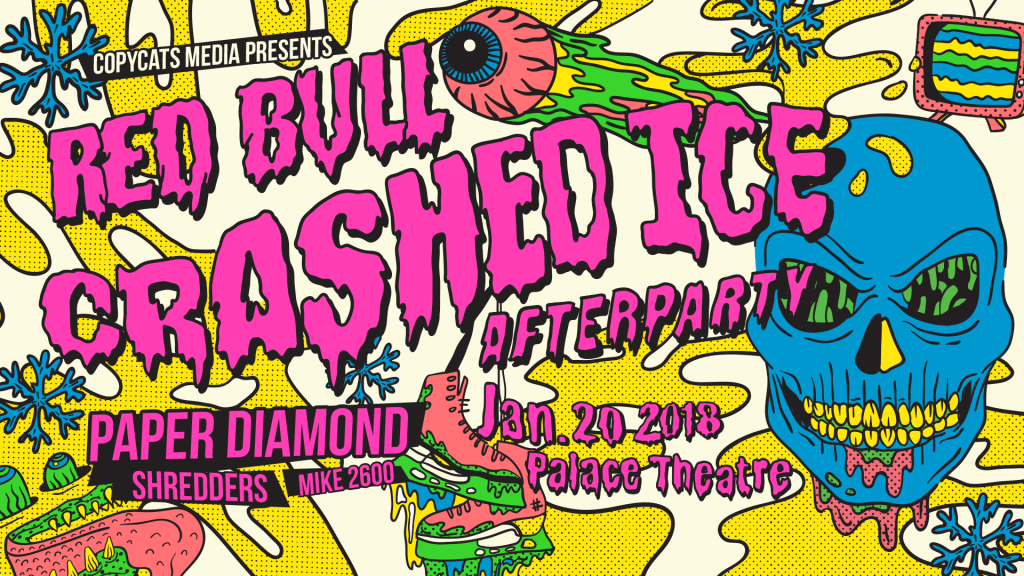 Now onto the very last element we were tasked with creating. A MIXTAPE! Yep, our friends Lazerbeak and Mike 2600 made a special mixtape just for those that attend the Afterparty, and we got to create a sleeve and disc imprint!

Yet again we were tasked with readjusting all the art to make work for a different medium.

We kept this one a bit more simple than the poster and did a fun knockout on the disc. Since the event does take place in January in Minnesota, what better way to evoke ice than to show the silver on the disc, right? 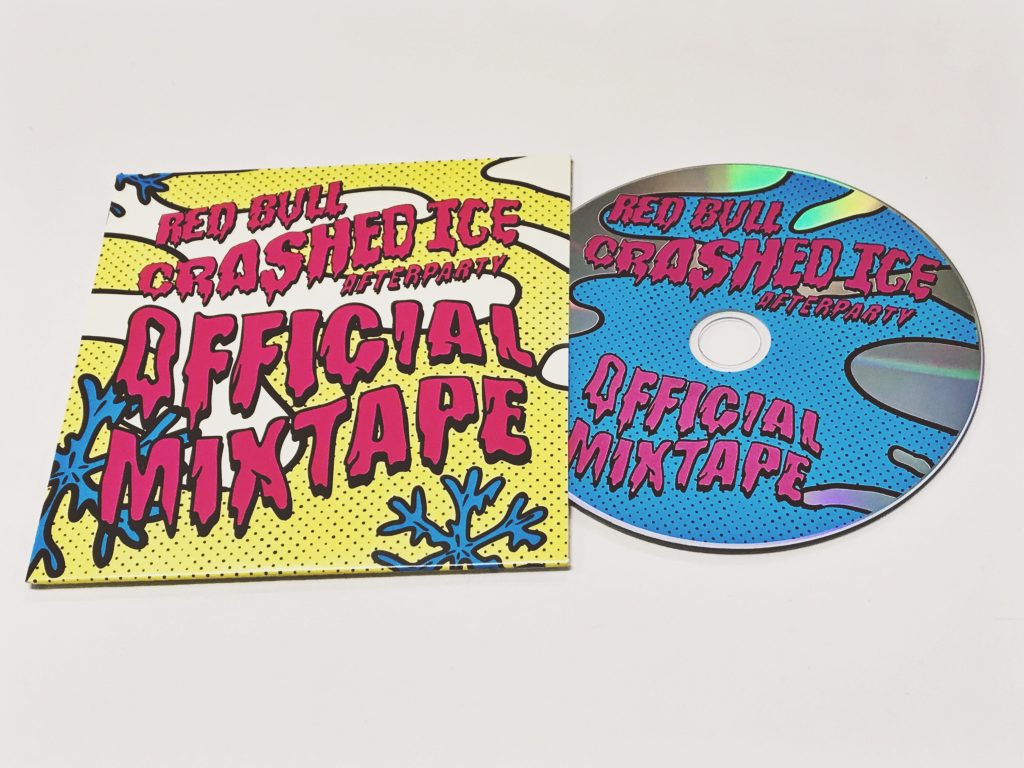 This project was really fun to work on and we’re so honored to have been able to have the opportunity to do this for Red Bull. We can’t wait for the next fun project!